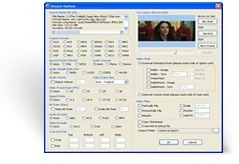 This post is dedicated to one of my friends, Coolie (not his real name but he preferred to be called that way among friends), a father and self-entrepreneur who created the outstanding Delphi VCL component for FFmpeg that makes it extremely easy to develop audio and video applications for Windows.

For those who are not Windows desktop developers, FFmpeg is the ONE video and audio applications library across all major platforms that is able to encode, decode, edit, convert and stream audio and video. It is widely adopted as the standard library for multi-media applications development. Chances are, what you currently have for media player in your operating system uses FFmpeg to do all the underlying work.

The problem with FFmpeg is that it’s only got a command line interface. You would definitely find it fascinating if you are a Linux guru, but not GUI users. Developers must create another layer of interface to accommodate end users, another layer of abstraction for FFmpeg, and that’s exactly where Coolie’s talent comes in, who heroically produced the Delphi VCL for FFmpeg and the ActiveX OCX Controls for FFmpeg. Problem solved for people who want to make video and audio applications in Windows but daunted by the command-line FFmpeg.

Simply ground-breaking work he has made, Coolie graduated from Tsinghua university, the China counterpart of MIT or Princeton — approximately 100,000 high school students each year compete for just 1 admission to Tsinghua. Think about that.

Feel free to bug him if you are interested in developing a multi-media application yourself — it’s not so hard as it may seem because many contemporary languages and platforms are made to be used by absolute programming beginners, such as VB.NET.