It’s better to style the /wp-admin of WordPress from your theme because it’s portable and upgrade-proof. Keeping allÂ customizationsÂ Â in ONE place is always a good idea in web development.

How to style WordPress admin backend /wp-admin from your theme?

That’s it. Now you can freely customize the look and appearance of the WordPress admin backend from within wp-admin.css in your theme directory.

Some of my sites such as ConvertHub has grown out of the 512MB box I have had for over 2 years at Linode. It’s been great but as I’m fed up with managing the server myself (I’ll come to that later), I went ahead looking for a solid VPS plan with WHM / cPanel that’s managed for me. After searching for a few weeks, I finally landed my deal with A Small Orange. 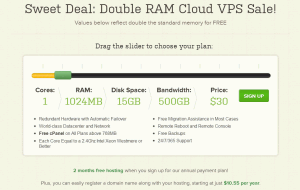 What I did was:

I challenge you to find a better VPS deal than this cause’ it’s mission impossible. The only downside is that the disk storage will have only about 8GB available for your websites / applications after the system takes 7GB. However, I doubt your websites would need that much unless they have millions of image files or tens of millions of records in the database.

Consider this hook to add something before your WordPress blog’s sidebar:

This could create a TOS problem towards AdSense because unconsciously, you would very probably end up adding more than 3 links unit per page.

To prevent this and only make the hooked WordPress function to run once (even it is called multiple times), use the PHP static variable in functions.

In the above snippet, the variable $called is kept alive across multiple calls to the before_siderbar() function. After the first successful run of the function, $called would have a value of true and it’s kept so inside the function every time it’s called afterwards. In the 2nd and every call afterwards, $called will always be true and the function returns before outputting the AdSense code.

There you go. Now no matter how many times the before_sidebar() is called, only the first run would output the stuff you put in it.