It became a total mess when I selected the entire root directory of my project and accidentally clicked Source > Format in Zend Eclipse PDT. All the files were instantly re-formatted and saved in a manner I wasn’t comfortable with and there didn’t seem any easy way to undo these changes that had been applied across nearly a hundred files in different folders.

They definitely should have prompted up a dialog box asking the developer’s confirmation. They probably will in future but for now, I need to do something to prevent this from happening again.

First we will disable / hide this menu item or we will probably accidentally click on it again. Without any prompt nor confirmation, PDT simply goes on formatting the selected items silently. When you are in a single file that would be fine cause’ you just use Ctrl + Z to undo the change, however if you are selecting an entire directory or the entire project, this command would go ahead and format ALL the files under it and automatically SAVE THEM all onto the hard drive. The next thing you find yourself doing is opening and reverting each and every one of the files one by one.

We should also disable this short cut keys combination which can also be inadvertently treaded on. Go to:

Done. Now the only way to format a page or a selected portion or a resource / item in PHP Explorer is to right click on the target and select Source > Format.

When you copy and paste code into Zend Eclipse PDT they will probably be automatically indented and not in the original manner. It may be annoying sometimes. To disable this behavior:

At any time, press:

For a list of available shortcut keys defined in your Zend Eclipse PDT.

For Zend Eclipse PDT to instantly show a tool tip hint of what the parameters of a function / method are so you don’t have to look up the original definition, just place the cursor in the parameters parenthesis and press one of them:

Which is defined under the title “Context Information” when you press Ctrl + Shift + L.

If a function or method name is elusive to you, type the beginning part of it and press:

And PDT would try and auto-complete it for you. It is defined under the title “Word Completion” when you pressÂ Ctrl + Shift + L.

The default array() indentation of Eclipse for PHP Developers when you create an array seems to be 2 tabs which I think are too much. To reduce it to just 1 tab:

To change the default indentation for wrapped lines:

I coded a lot in Zend Studio 5.5.1, the gold old version thatâ€™s insanely popular because it made it so easy to code in PHP. As PHP evolves, ZS 5.5.1 gradually falls behind of the edge and it simply becomes imperative that you switch to the latest version of Zend Studio, the 8.

The IDE is built on Eclipse, which I have never used before. Itâ€™s great but one still needs some time to learn the curves before he or she can jump in and swim like a whale. Today I gave it a test drive and have some tips to share with you when you are just starting out with Zend Studio 8.

Before you create your project or editing any existing PHP files, you may need to change the default encoding of the Zend Studio Workspace, or make sure it is what you usually work in.

By default, the encoding is that of the container (your operating system). Iâ€™m using a Chinese Windows 7 so the default encoding is GBK and it is everything but good because I primarily develop English projects.

For North America users, the default encoding should be ISO-8859-1. If you open up a file thatâ€™s encoded in UTF8 without changing the encoding accordingly, you may end up screwing up the file. And another victim.

In 5.5.1, function parameters hint is automatically displayed when you place the cursor in the parentheses. However in 8, the hint is only automatically shown after you immediately finish typing the function name. When the focus moves away or you click anywhere else in the window, the hint disappears and if you donâ€™t know the correct shortcut keys, you wouldnâ€™t be able to get it back.

After a few searches, I found out the key combinations to get the parameters hint re-appear: Alt + Shift + /

Some pages say itâ€™s Ctrl + Shift + Space but it didnâ€™t work out for me. Maybe itâ€™s a version thing?

Along with the previous tip, this one is pretty important in modern IDE because they are essential in boosting oneâ€™s coding productivity. Canâ€™t live without them.

When you are typing the function name, Zend Studio would guess what you mean and display a list of possible candidates for you to choose from.

If you want it to appear again, just place the cursor on the function name and use Alt + / to make Zend Studio makes a guess again.

You can use a lot of shortcut keys in Zend Studio 8 to make things happen quickly and intuitively, just press Ctrl + Shift + L to bring up the key map toÂ see the full list. Here’s a list of the commonly used commands: 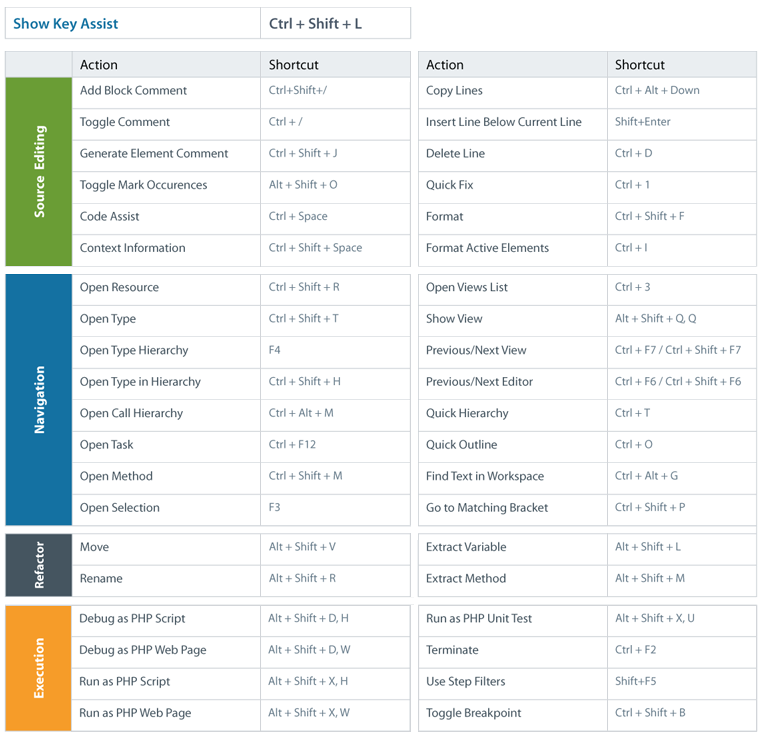