Naturally, you’d never expect an AdSense ad of a site to appear on itself. But this I just encountered, indicates an inherent *bug* of AdWords. 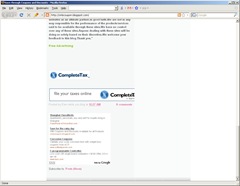 Or is it? But I’ll never understand otherwise. What’s the point? Maybe there’s an option for the AdWords advertiser to opt out of his advertisement listing being published on his very own site with AdSense on, but can’t Google just do it automatically. My other guess is that for a very large community site such as a popular forum, there are people (who are members of the community) who wants to advertise to the very audience (mostly members) of the site, sets up a campaign via AdWords targeting them and puts the ad exclusively on the site which is also targeted a part of it.

Anyway, I believe Google should automatically turn this off by default and let the advertiser himself to explicitly turn it on.